Before the holidays, I started reorganizing our home office. Actually, I kind of ambushed my husband when he walked in the door one afternoon and basically told him I couldn’t take the unorganized, never fully unpacked, clutter bomb of an office anymore. (I may or may not have been that nice about it. 😉 You decide.)

The office has gone through several transformations since we moved in, but it had up until now, never really been functional. For a long time we didn’t even have bookshelves, which is saying a lot considering we have many, MANY books. (The previous office breakdown garnered those. Hehe.) To say the room was a mess was well…generous. This is what it looked like before: 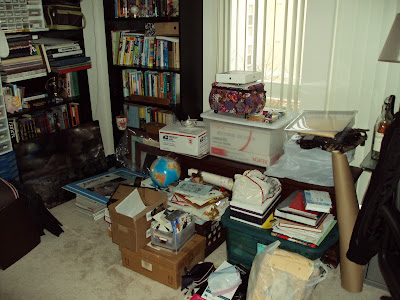 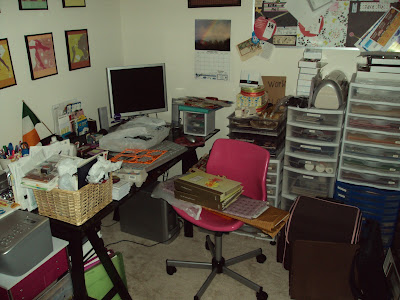 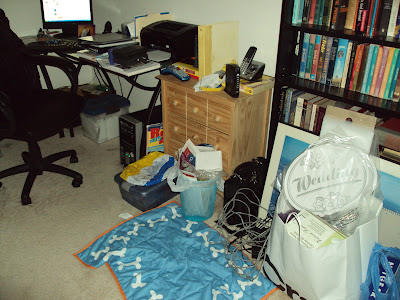 Do you see why I was ready to tear my hair out? Let me just tell you that weekend there was much gnashing of teeth at my house! My hubby is so incredibly logical and so utterly calm (read: completely unlike me) and it can be just a teensy, weensy bit frustrating when I want action N.O.W. Sometimes, I don’t really feel like planning and coming up with ideas and discussing it thoroughly. I just want it done. And I want it done without discussion. But this is where God laughs at me and nudges me in a playful way. “But you did not marry someone like you did you? Nuh uh. I put you with someone who could even you out a bit!” I am forever sure that He gets a big laugh out of how opposite we are.

Anywho, after much *ahem* discussion I finally broke down and pulled out The Sims 2 (stay with me…) and the Ikea catalog. You see the funny thing about The Sims is that you can build your own house, so, I built our office in the game. Then we sat around playing with the Ikea furniture (did I mention that The Sims 2 has an Ikea “stuff” expansion? Yeah…it’s awesome.) and layouts and furniture until we came up with something we thought might work. (“Honey, when can we go to Ikea? Can we go tomorrow? PLLLLEAAAASE???”) Honestly, I just don’t have the money for fancy design software, so I used something I already had and it worked great.

So here’s what we did. We went to my favorite store on the planet, IKEA (Can you hear the bells and angels singing? Seriously, it is awesome.) and purchased two new pieces of furniture. I was a little daunted by this because after taking the before pictures I realized how much furniture we already had in there and it didn’t seem to be working, but I also didn’t think we had space to put it anywhere else. Oh boy was I wrong. Trading out two simple pieces of furniture and rearranging the rest gave the office SUCH a new look and oh heavens is it SO much more functional.

First, we grabbed a new base piece for my Ikea desk that would replace the already existing tripod leg and provide extra storage for office supplies. They had previously been stored in the apothecary side table and the rolling cart the printer was on, but neither were working well or holding nearly enough. I was determined that I would get it ALL in the new desk piece. This is what it looks like now: 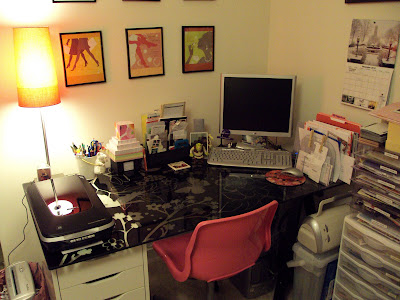 I did manage to get everything from TWO pieces of furniture into the new piece and I smile just a little bit every time I realize that there’s a place for everything and everything is in it’s place. (And it thrills me to no end that there’s a home for my label maker (Love you!).) I also had room for some of the stuff that had formerly taken up real estate on my desk top. It’s nice to have a few more inches of work space at my disposal. 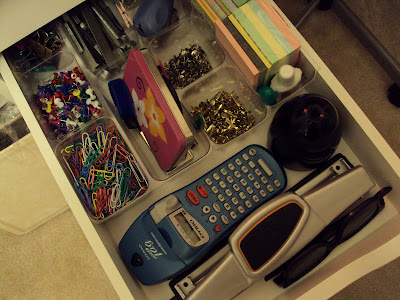 Second, we purchased a $99 shelf that can be used a variety of ways. We had originally planned on buying the 8 cube shelf we so love, but they were out in the color we wanted so we went with this one instead and I. Love. It. The old hope chest that had been in front of the window was big, and it held a lot, but it wasn’t much in the way of being functional when things were placed on top of it. It is now sitting in our dining room serving as extra storage for linens and dishes we don’t use often. So far, so good. This is what that area looked like before: 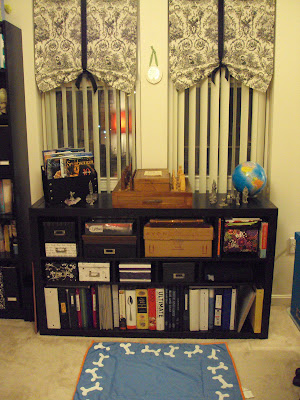 The shelf primarily holds photo boxes full of old family and school photos but since I was in a reorganizing mood, I went ahead and purchased new photo boxes in black and while to go with my desk and organized all of the photos inside. It also houses my sewing box, our take out menu file and our home notebook (which I have been working on and will share soon!).

The blue mat is for my dog…yes, really. Who needs kids when you have a 3 year old chihuahua?

The curtains were inspired by an easy window treatment blog post from Thrifty Decor Chick and I made them! You can find a button on the right side of my blog that will lead you to her site. It is TOTALLY worth the read.

While we were at Ikea, we bought a letter file for hubby’s desk to help corral the paper. We also took the time to frame his father’s certificates from NASA – something near and dear to both of us, and a poster of his hometown – Annapolis. The finishing touches on his side were his chess set – made by his grandfather – and his collection of pewter figurines. I cannot tell you how happy it makes me that I could do that for him. For a long time this room has really been more “mine” than his. Now I feel like he’s really a part of this room. 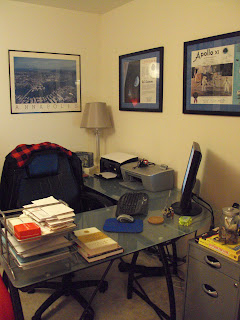 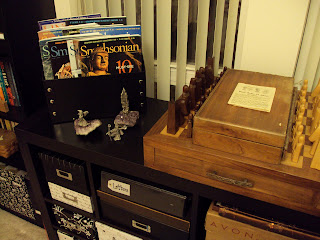 On my side it was mostly a cleaning and organizing endeavor. I chose a pretty basket to house all of my Cricut cartridges and supplies. I will fully admit that the bulletin board, while cute needs some help. I have a plan for that though, and it will be a future Before and After (from here on out B&A). 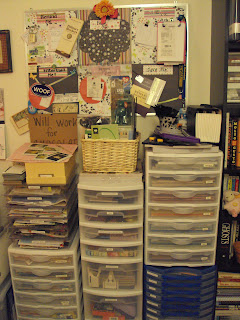 I also narrowed down the amount of cups holding pens and supplies. I purchased more plastic scrapbook bins to house each of the important scrap projects I couldn’t work on until now because I didn’t have the space. This area isn’t the prettiest in the space, but it is so functional that I can’t be bothered about it too much. I’ll purge and add the pretty later. I promise to share.

Can you see the floor there? I can and I am soooo excited. The big brown rolling cart houses my sewing machine. (And yes, those -are- Fraggles on my bookshelf…) 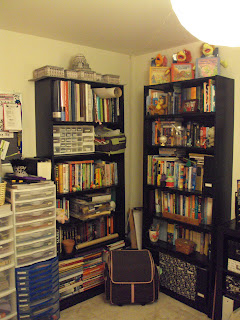 This was my first Before and After and I really hope to have more in the future. I’m linking it up to Thrifty Decor Chick’s Before and After Party! Check it out over there. Trust me, you’ll thank me!