Hey y’all! Did everyone have a nice holiday? The Hubs and I took it easy over the weekend and he surprised me by taking the whole week off, so I’ll be a little sparse this week. We see so little of each other during the week and he never takes off, so I’m taking advantage of him being home!

Still, I just couldn’t resist sharing this super simple, scrumptious recipe my friend Ree (not that Ree 😉 ) gave me last week. It knocked me out! She’s been my best friend since high school and I trust her cookin’ skills implicitly. 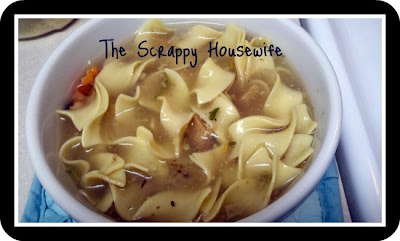 OK raise your hand if you had turkey for Christmas dinner. We had ham – oh so much ham, but I had a ton of turkey left over from Thanksgiving and I needed to use it to make room in our freezer since my in-laws sent us eight – count ’em eight filet mignon for Christmas! But I didn’t want to just heat and eat or make a pot pie. So I did what any resourceful 32 year old woman would do – I called my best friend. 😉

1 pat butter or margarine (We only use butter in this house!)
Celery, Onions and Carrots diced
Salt and Pepper
Dried (or fresh) Oregano and Basil – small cupped palm full of each
Chicken broth (one box OR two cans OR two bullion cubes dissolved – just follow the directions on the bullion package if you go that route – it’s what I use)
Leftover turkey roughly diced
Water
Egg noodles

Start by gently melting the butter in a pan and throw in your celery, onions and carrots to saute until tender. Watch the onions to make sure they don’t burn – though mine got a little brown on the edges and it still tasted fine. Season generously with salt and pepper and give the veggies a stir or two. Add in the basil and oregano and stir. Add in your chicken broth and heat through. Throw in your diced turkey and add several cups of water (I just eyeball it generally – I want a nice golden broth, but not too light). Bring to a boil and then turn the heat down to a simmer. Cook for an additional 30 minutes.

Ree’s Tip – Cook your noodles according to package directions in a separate pot, then drain. Do not add them to the broth mixture. When you’re ready to serve, pile some noodles at the bottom of your bowl and then ladle the liquid over the top. Your noodles don’t get gooey or overcooked this way, AND if you have any left over broth, you can freeze it to use later. Noodles don’t freeze well.

Christina (aka Scrappy) says – I like to cook my noodles just short of being done so they aren’t over done by the time I get them drained and in the bowl. Also, Ree recommends oregano and basil, but I had oregano and fresh tarragon on hand so I used those. I cupped my palm and made a nice palm full of the dried oregano and then used the leaves of two or three stalks of the tarragon chopped and it tasted great. I also bucked Ree’s tip and threw my noodles in my broth and they held up well over a couple of days in the fridge (leftover leftovers?), but if I want to make some later to freeze for an easy supper later – I won’t add the noodles.

I used a 6 qt Le Creuset oval dutch oven to cook my soup in so I filled it with the broth and water about three-fourths of the way full. Like I said I generally eyeball it because I know what I like and I taste it as I go. If it seems too strong or too dark add water to your taste bud’s liking. If you too go the bouillon route, dissolve it in a separate pot first and warm it through and then add it when the recipe calls for the broth.

Seriously, I am in love with this soup. It was so hearty and filling and a great way to maximize all the leftover turkey (of which I still have a ton). I will definitely make this again as winter wears on. I hope you try it!

I’ll be back later in the week with some thoughts on 2011 and to share another favorite soup recipe using our  ham leftovers – this time from The Hubs – and to make an announcement.

Hope everyone is having a great week!