If you had been able to take a look in my room when I was a little girl and now, you’d probably see a stark difference.

When I was little, my bedroom was ruffles, bows, pink walls, dolls (lots of dolls), a trunk filled with dress up clothes, a canopy bed with curtains on the sides and a closet full of dresses and ribbons for my hair.

Today – my bedroom is shades of white and gray and navy and full of dark furniture. It is not in the least girly. As a matter of fact, I think my vintage Steubenville tea set that holds my perfumes and nail polishes is probably the girliest thing in there. 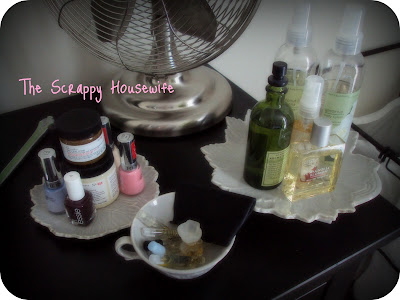 Growing up I was the only girl in a family full of boys. When I was a little girl, I had two older brothers and four nephews. (I came really late in life for my parents.) My toys were mostly girly but I had some cars and laser tag gear and Nerf stuff just to fit in. I was the epitome of a girly girl. Lots of dresses, ballet outfits, and later make up.

(Side story: On the first day of sixth grade I came to my mother asking which eye shadow I should wear. She flat refused to let me. I was so angry. Now I wouldn’t let any future daughter of mine wear make up until high school…ok middle school – but not much. I ruined my skin wearing make up in the 5th grade. I should have listened.)

Then high school came and it became very, very clear I wasn’t a morning person. I loathed getting up earlier and I couldn’t get it together enough to get up and put make up on and do my hair like the popular girls did. My mother, who had once been thrilled to dress me in girly clothes, hated my new choice in clothing – jeans, flannel shirts and boys Nikes. I was trying too hard to fit in at school and looking back it didn’t really work anyway.

My best friend (who is still my best friend to this day) enjoyed wearing what she and her mother fondly called “mulch” – everything was shades of khaki, blue, green, brown and black. I grew to adopt this color palette myself. I, too, wore “mulch”.

Like my clothing, my room changed too. I got rid of the pink walls and bedding and instead opted for beige and hunter green with a lovely *ahem* country apple wallpaper border (yes, really…). Mom went along with it but I’m sure she hated it.

When I moved into my own place (pre-hubby), I had grand plans to paint one room solid pink – to regain some of those girlish tendencies I had so long ago left behind. I bought the gallon of paint even. I never used it.

Sadly, that closet of dresses is still long forgotten and only very rarely wear jewelry or paint my nails. When I became a grown woman I loved heels for awhile even – now I don’t ever wear them. I used to love make up but I hardly go out with any on – something my 13 year old self would have considered appalling.

Today, things are slowly changing. If you look in my closet there is more color. I can’t help but think about my mother when I try on clothing that isn’t brown or black. She’d be so proud.

My bedding has a pretty floral pattern – even if it’s grey.

My craft area is full of pink and black and even some teal/aqua and orange.

Some days, I’m acutely aware that I am not that little girl anymore – that I don’t really pay any attention to myself or to any of the things other women would and I wonder why.

It’d be nice to be that little girl again – at least once in awhile.

The Scintilla Project Day 6 – You Are Still With Me

The Scintilla Project Day 3: Staying Together is Harder than Walking Away

The Scintilla Project Day 2: When did you realize you were a grown up?