This weekend I thought I’d do something a little different with Sunday Pinspiration. I thought I’d show you something I found on Pinterest and actually tried! If you want to try it yourself, please click the link below the picture to get the recipe and repin it yourself from there. 🙂
Awhile back, I found this pin on Pinterest:

Source: lifecraftsandwhatever.blogspot.com via Christina on Pinterest
Which led me to the recipe for the tub and shower cleaner here:

Source: food.com via Christina on Pinterest
It boasts that a simple mixture of Dawn detergent and white vinegar works better than any store bought cleanser on showers and soap scum. I’m always up for saving some money so I thought I’d give it a try and then let you all know how it went. I’m willing to be a guinea pig for you. I got your back, yo. 😉
First, let’s get right to what you really want to see – the Before and After pictures. Since our shower is white, I decided to use the metal parts of the faucet as my test area.
Here’s the knob: 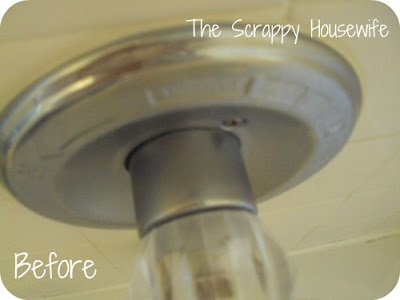 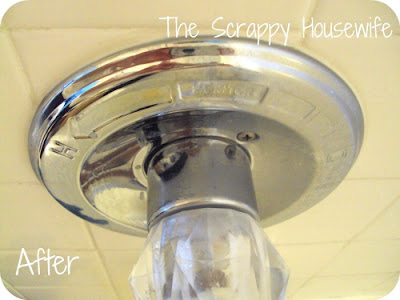 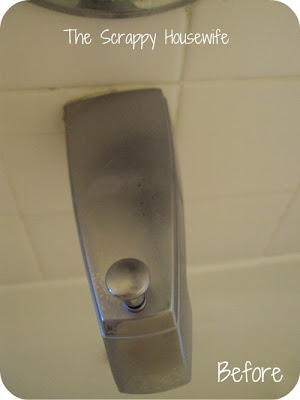 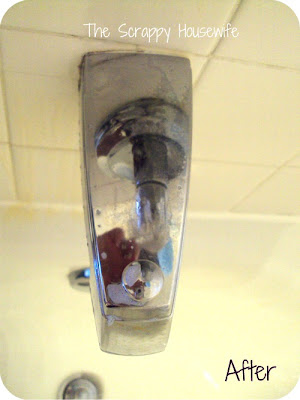 Pros:
It works pretty well! I’d say its fairly comparable to Scrubbing Bubbles or something of the like. I think you can better see how it works in the faucet pics. I tried to get as close as I could to the same shot each time. In the after photo of the faucet you can even see my hand reflecting in the metal! Pretty spiffy.
Cons:
While it got rid of soap scum really well, it left behind water spots. Also, it’s thick, almost gel-like which made it difficult to get out of the spray bottle I had on hand. Eventually I just gave up trying to spray it and dumped it on.
Disclaimers and Cautions:
The source article was pretty specific about using only the original blue Dawn detergent, but I only had the orange anti-bacterial on hand so I used that. That could have had something to do with the water spots, but I can’t be sure if it really made much of a difference at all. If you’re going to try it yourself, I would definitely invest if a heavy duty spray bottle for cleaners from some place like Home Depot or Lowes. I had a cheap plastic one here that I used (there I go trying to save money again), but it literally warped under the heat of the vinegar and it wasn’t a spray bottle meant for cleaning products; more like something you’d use to spritz your hair with water. I suspect this had something to do with the fact that I had a hard time getting the gel out with the trigger.
Overall Impression:
I liked it and I feel like it worked. I do have to admit that I had a bunch of extra cleanser so I dumped it around the edge of my tub – something Scrub Bub doesn’t really do well with – and when I wiped it away, my white tub was shining! I live in an apartment. I don’t think that tub has ever shined that much. Not even when we moved in. Sorry about the lack of picture on that part but I couldn’t get a good picture of the shiny white tub…it just looked, well, white.
Bottom line – I may use it in a pinch when I’m low on Scrubbing Bubbles, but I don’t know that I’d reach for it first because, well I have to heat the vinegar and then mix everything up. It would be worth it if you’re willing to take that extra step or two to save some cash. If you give it a shot, I’d love to know what you think of it! 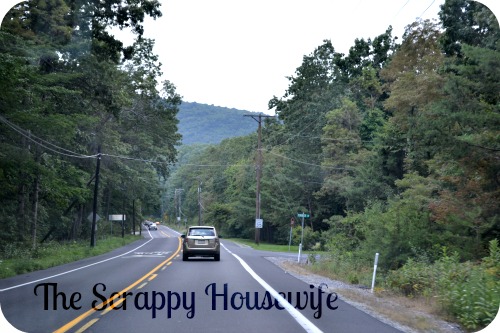 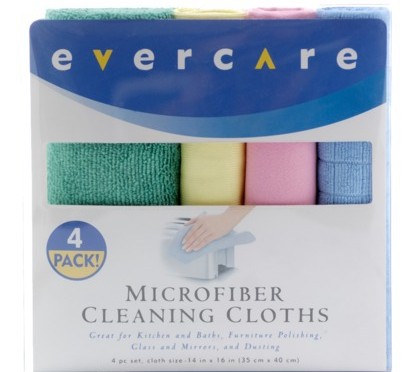 Going Paperless in the Kitchen