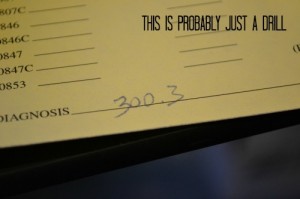 Those four little digits make up an ICD-9 code for medical billing. But for me, it’s more than just a billing code. It’s what I have. I almost said it’s who I am, but that’s not true. I am a person. That little code is what’s wrong with me. (Even that statement is wrong. It’s not what’s wrong with me, it’s how my brain lies. And it does dear friends, it lies often.)

So, unless you work in a medical office and do a lot of billing, you probably won’t know what that number means.

300.3 is the ICD-9 code for obsessive-compulsive disorder or OCD.

I’ve known for awhile that I probably had OCD, but no one (even former therapists) had ever put it in writing before and made an absolute diagnosis. I don’t have a dedicated anxiety or panic problem like I thought. I have OCD.

Here’s a word of caution though, and a plea really. Two simple things to remember:

1. I don’t sit around all day and wash my hands. Many people with OCD never have that compulsion. It’s not about washing your hands. Sadly, most TV shows that “highlight” OCD only show that side of it. It’s so much more than that.

and 2. Please don’t say you’re “a little OCD” about things. I hate that phrase. I hate seeing it on other blogs. No one is “a little OCD”. That’s like being “a little bit pregnant”. You might like things a certain way, you might be particular about how your laundry is folded or how the bed is made. You might even be really anal-retentively organized. That alone is not OCD. Please I beg of you. Don’t claim a disease (it is a disease) you don’t have. If you had to experience what I go through on a daily basis, you wouldn’t throw that phrase around so easily.

OCD is terrifying. It is painful. It is exhausting. It doesn’t only apply to washing my hands or how I organize my kitchen cabinets.

OCD isn’t who I am, but it is my disease. Sadly, there is no cure, but I’m going to put up a good fight. 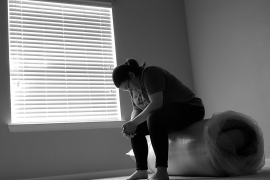 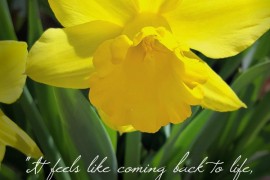