A couple of weeks ago, I posted briefly that while walking through our favorite antiques mall my husband and I (well ok, mostly I…) found a gorg mid-century modern dining room set with table, leaf and 6 chairs (SIX!). It was advertised as a Drexel “Dimensions” table and priced at $645 for the set. Yeah, the set. That was insane enough, and I wanted it, but it needed love and honestly, I knew that “love” would consist of at least a few hundred dollars worth of refurb so I inquired about contacting the dealer to work out a better price. He called me back a few days later and I was able to talk him down to $475, again, the set. Seriously? Yes. Here it is the way I found it: 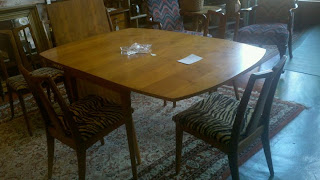 Crappy cell phone pic, sorry. The crazy star ashtray was not included…I’m sure you’re heartbroken…
Also, I just know you love the faux tiger print fur…no? Me either. It. Had. To. Go. So in the interest of all things bloggy, I decided to show you how I fixed it up.
Side note: It -is- marked Drexel. The leaf and table tags match and the chairs are also stamped and they match all the information I could find online about how to recognize a real Drexel. The table is from the Drexel  Declaration line and is marked dated 1961. After some research a friend of mine found the original catalog page for it: 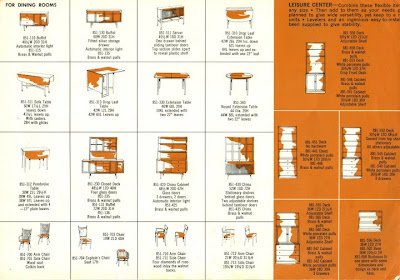 We haven’t found the chairs yet, however. They aren’t the same style as the table and while we have the item number, Drexel doesn’t even have much information. Still looking.
Anywho, back to my mini-tutorial. I decided I would rather live with it a bit at first before refinishing it and I wanted to do more research into value in case refurb would damage it so I opted for a “clean and recover” plan.
Here’s how I recovered the chairs.
Step 1: Gather your supplies. You’ll most likely need a screwdriver, a staple gun, the fabric you’re using (upholstery or home dec weight) and perhaps a flashlight for step 2. 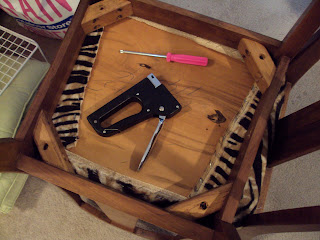 Step 2: Find the screws holding the seat on. I zoomed in and used the flash to show you where you’d find them. I used a flashlight when I first started to make sure I wasn’t just gouging wood. 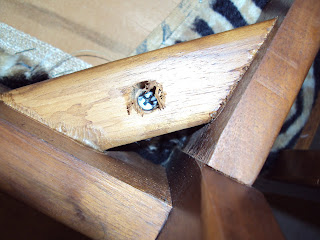 Step 3: Lay your seat cushion on top of your fabric and measure a square with enough fabric to wrap around the seat and be stapled. 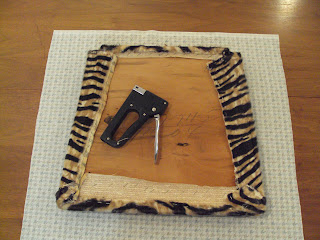 I chose a simple herringbone pattern in two shades of blue, brown and tan. I felt the pattern was masculine but also somewhat period with a modern update and I loved the color combination: 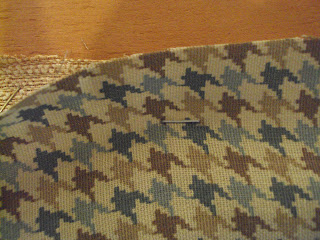 Step 5: Staple in the middle on the side that will be facing the back of the chair. Honestly, I did this because my seats were oddly shaped, I assume if it’s a square seat, it wouldn’t really matter. 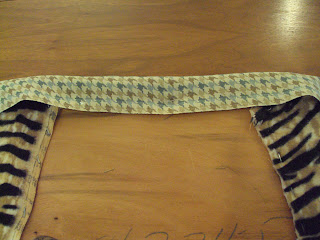 Step 6: I stapled in the middle on the remaining three sides and then began to wrap and pull (gently!) the fabric around the rest of the seat. If you pull too hard you’ll end up with an odd looking seat so just tug enough that the fabric is taut, but not too tight. 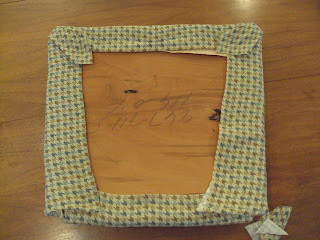 When I got to the corners I pinched them together and pulled to make sort of a boxy looking corner. My chairs had a funky angle on the back so I just did the best I could to pull them taut and square them off so they’d fit back in the chair frame OK. It took some practice, but they turned out beautifully. I made sure in the beginning to grab more fabric than I thought I’d need just in case I made some horrible mistake since this was my first time. I didn’t end up needing it, but I highly recommend it. Once a staple is in, it’s in. I know this because I tried to remove the two layers of fabric stapled on to see if the original felt was still there. The fabric will rip long before that staple will come out.

Step 7: Lay your chair cushion/seat upside down on one of the other chairs (using the same height chair seemed to make it easier and I didn’t risk scratching the table or pulling my back out of whack) and replace the screws. You might have to push a little and yes, the screw will go through the fabric on the bottom, but you won’t see that. CAUTION: I would not, under any circumstances, use an electric screwdriver. I considered it, but realized the wood in the seat was thinnish and I felt it might pop through if I had serious power behind it. Have any of you had success with that? Everything being antique gave me pause. I didn’t want to risk any damage. 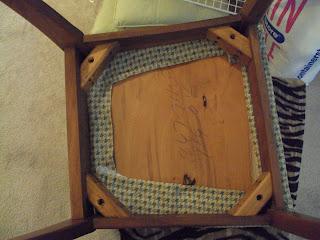 Now you’re ready to flip your chair over and enjoy!

To clean the table and chairs (which I cleaned while the seats were off) I used 1/4 cup Murphy’s Oil Soap in one gallon of water and rang out the microfiber cloth very well before wiping with the grain of the wood gently. I also would caution you not to over clean. Trust me it was hard, but I had to pull back. The last thing you want to do is pull the finish off of an older piece. I consulted a friend who has worked in this area before as well as taking advice from a furniture re-finisher we know personally. Murphy’s is the best way to go if you have to clean, but don’t be vigorous and make sure you stop if it starts to feel sticky. I was lucky in that my pieces were still finished, but I was still super careful.

Here’s what the table and chairs look like now: 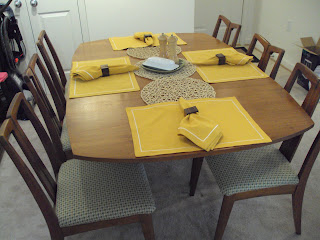 Yes,  I keep my table set like that all the time. I have become my mother (a 60s housewife no less), but I’m OK with that. Next up: Brown football helmet. 😉 Name that movie…
Here’s a good side by side B&A of the chairs:

I am in love with this table. It makes me so stinkin’ happy to walk past it and eat at it and have a large enough space to work on when I need to. It’s a little large for the space, but not overly so and we’re looking for a bigger apartment anyway.
Special note: In case you hadn’t noticed, I haven’t been around much. I won’t go into details, but I thank you for sticking by and being patient. I’ve got several more posts for the next two weeks and I finally feel back on the horse. 🙂 Stay tuned!
This post parties at:
Hookin’ Up with House of Hepworths

March Before And After – How I Organize My Linen Closet

Where Scrappy Gets Crafty – Pt 1